The Risk of No Deal Increases – ‘What Happens Next?’ – The 7th Acorn Regulatory Brexit Whitepaper

The seventh Acorn Regulatory Brexit whitepaper looks at the impact of a no deal departure from the EU on a number of sectors. 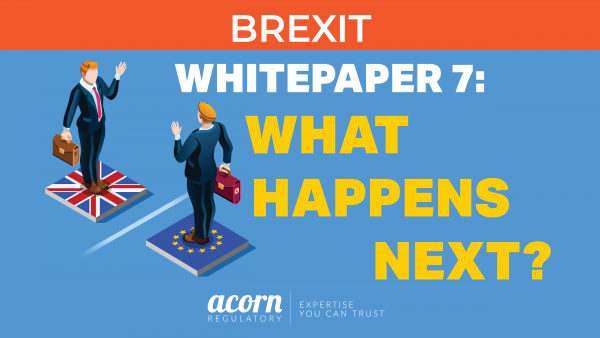 Our pharmacovigilance team look at the measures that companies need to put in place now if they are to prepare for the UK leaving the EU without a deal.  The role of the QPPV has been much discussed in recent years, since the outcome of the referendum became known, and companies need to be aware of the implications that Brexit will have on that role.

The medical devices team look at the role of the EU Authorised Representative and the implications for Notified Bodies.  The devices sector is in a particular ‘state of flux’ at present with the introduction of new legislation and Brexit adds to the issues that device manufacturers need to be mindful of at this time.

Finally, our medical team look at the impact on clinical trials.  Trial sponsors and partners need to be aware of the impact of Brexit and the article contained in the whitepaper looks at what needs to be considered.

You can download the latest Acorn Regulatory Brexit whitepaper by completing the details below and we will send it straight to you.

The results of the European Parliamentary elections in the UK point to a divided country.  However, the recently formed Brexit Party has secured a significant vote at the Conservative Party’s expense. Now, as the Conservative Party seeks to regroup and select a new leader, the likelihood of a ‘no deal’ exit has further increased.   The seventh Acorn Regulatory Brexit whitepaper looks at the impact of a no-deal Brexit departure from the EU on a number of sectors.

What Will Happen To The QPPV After Brexit?

Brexit will impact on many aspects of the life sciences sector.  One of the areas that will be most impacted will be the role of the Qualified Person for Pharmacovigilance (the QPPV).  In this article, we consider the impact that the UK’s exit from the EU will have on the role and the measures that companies will need to take once Brexit happens.

No Deal Brexit Planning – What We Know So Far

The ongoing coverage of the UK’s moves towards leaving the European Union continues.  This is a difficult time for companies in the life science sector in the UK and outside of the UK as they work to ensure that patients will be able to access medicinal products and devices when the UK finally departs, as is expected on October 31st.  the likelihood of departing in a no deal Brexit scenario has now exacerbated and companies are best served by preparing for such an outcome.

Brexit Regulatory Issues: What You Need To Know

Brexit has been an ever-present issue for professionals in the life sciences sector since 2016.  We have worked with many companies in preparing them for the changes that will come from the UK leaving the EU.  Here, we have created a ‘long read’ blog looking at Brexit regulatory issues and what you need to know to ensure that you are prepared for the changes that it will bring about.