Acorn Regulatory’s Managing Director Dr. Gemma Robinson was one of a number of Irish life science entrepreneurs who took part in Enterprise Ireland’s recent Trade Mission to Italy.  In this blog Gemma writes about the initiative and the companies that she met while participating in the trade mission.

Acorn Regulatory were among the 17 Irish Indigenous medical device manufacturing and services providers who  took part in the EI led Trade Mission to Mirandola in Italy during the 10-12th April 2018.   Italy’s medical device cluster is mostly located near Modena in the Mirandola district. There are more than 100 medical companies in the Modena region with a total revenue of €400 million. 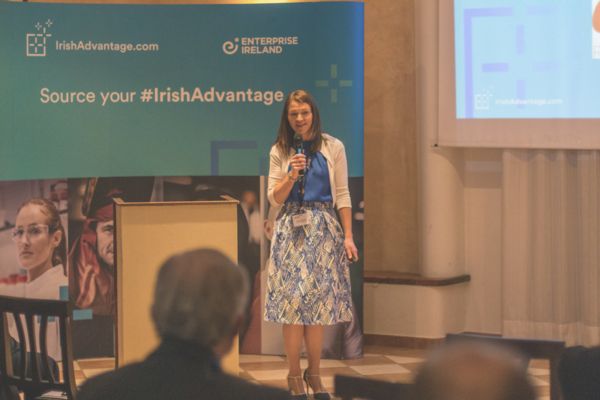 Dr. Gemma Robinson speaking at the EI Trade Mission to Italy in April 2018

On our first day, we were given a site tour of Fresenius Kabi, and met with the General Manager and many of their senior staff, including the Quality and Regulatory Affairs Director.

Fresenius Kabi is a global healthcare company that specializes in lifesaving medicines and technologies for infusion, transfusion and clinical nutrition. Within transfusion technologies, Fresenius Kabi offers products for collection and processing of blood components and for therapeutic treatment of patient blood by apheresis systems.

On our second day, we were taken to the beautiful ‘Villa Tagliata’ where Minister Pat Breen T.D., the Irish Minister of State for Trade and Employment, Business, EU Digital Single Market and Data Protection greeted and welcomed almost 100 Italian guests from these locally operating  medical device and biomedical companies to meet Acorn Regulatory and the other 16 Irish Companies who had travelled.

During the day, we had individual meetings with many of the key QA/RA decision makers and getting to hear about their challenges and plans for implementing the necessary changes to transition their Technical Files (TF) to the new MDR/IVDR requirements.

Later that afternoon, we had site visits at LivaNova and B. Braun also located in the Mirandola region.  LivaNova  (formerly part of the Sorin Group)  focuses at its Mirandola site on Cardiac Surgery, where it is the global leader in heart-lung machines and recognised as the world’s #1 cardiopulmonary bypass company.

B.Braun has a long history in medical device and patient care, founded in 1839, in Melsungen, Germany. Today B. Braun is one of the world leading providers of healthcare products and closed out its fiscal year in 2017 with sales of 6.8 billion Euro.  We visited the B. Braun Avitum site in Mirandola where its main focus is on the renal care division; haemodialysis, acute blood purification and apheresis.

Apart from seeing the amazing range of products produced at each site and the impressive high tech facilities employed therein, what was most impressive was the strength and courage each company showed to rebuild their facility within a number of weeks (<12 weeks in many cases) following the serious earthquakes in 2012 in the Emilia-Romagna region where an estimate 27 people died.

The people we met showed true dedication and commitment to rebuilding their company and each company has increased their turnover year on year despite the tragedy that befell them.

We ended our busy day with a gala dinner at the ‘Villa Tagliata’ where our many new formed Italian friends joined us for dinner and shared stories.

Acorn Regulatory is one of the companies featured in Enterprise Ireland’s Irish Advantage campaign.  You can read more about our involvement in the campaign here.