The Implications of Brexit for the Life Sciences Sector

The implications of Brexit are still being felt.  Politically, the decision has triggered a chain of events that none of us could have ever foreseen.  Now, with a new Prime Minister in Downing Street and three leading ‘Brexiteers’ appointed to offices of state that are critical to the delivery of the wishes of the majority of voters, we are certain that “Brexit Means Brexit”.

There is now great uncertainty for the industry sectors that we cover.  Questions about appropriate regulatory strategies, potential differences in regulatory frameworks, the re-location of the European Medicines Agency, loss of a powerful national competent authority all hang in doubt.  This briefing document aims to throw light on what Acorn Regulatory sectoral experts know now and what they believe will happen.

We have become the ‘go-to’ people for companies seeking regulatory advice regarding ‘Brexit’. Since late last year, we have fielded countless queries from long-standing and prospective clients as to how their companies and their products might be impacted by a British decision to leave the European Union.  We are happy to answer queries from any company on the regulatory issues relating to the vote.  Please feel free to contact our team on 00353 52 61 76706 at any time about the issue.

Acorn Regulatory has a large team of experts based at our headquarters in Ireland and working with our clients on sites in Ireland, the UK and mainland Europe. We have a truly global client list supplemented by access to a wide network of specialists in local markets.

We will produce further ‘Brexit’ briefings as more information becomes available to us.  We would recommend visiting the Brexit section on our website regularly to keep abreast of industry relevant updates on this issue and others.

The Implications on Existing Marketing Authorisations

London, as host city to the European Medicines Agency (EMA), with a full-time staff of more than 800, is the largest EU body in Britain and has overseen pan-European drug approvals since 1995 from its headquarters tucked away among global banks in London’s Canary Wharf. The centralised procedure is compulsory for medicinal products manufactured using biotechnological processes, for orphan medicinal products and for human products containing a new active substance, which are intended for the treatment of AIDS, cancer, neurodegenerative disorder or diabetes. 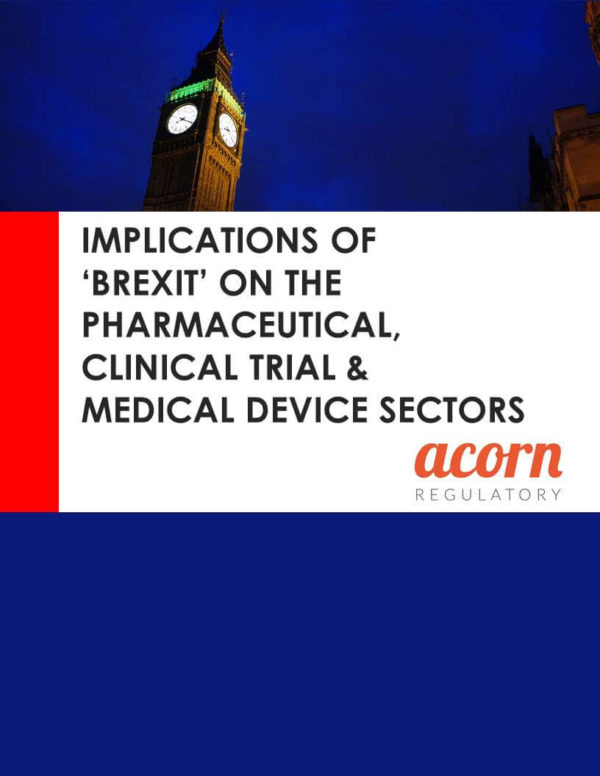 ‘Brexit’ is likely to see the EMA faced with relocating to another European Union Member State (EU MS).  Sweden, Denmark, Italy and Germany have all expressed interest in hosting the EMA instead of London, since firms in these countries are keen to be located close to the region’s key regulator. The UK has acted as Rapporteur or Co-Rapporteur for significant number of centralised procedures over the years. What effect will the relocation of the EMA to another EU MS have on such medicinal products?

The UK’s National Competent Authority; Medicines and Healthcare Regulatory Products Agency (MHRA) have dominated the last two decades as the Reference Member State (RMS) of choice for large numbers of European marketing authorisation applications such as the Mutual Recognition Procedure (MRP) and Decentralised Procedure (DCP). It is anticipated that these MA’s faced with a ‘decoupling process’ whereby they will need to select an alternative RMS to act on their behalf.

We can support you with this ‘decoupling process’ and ensure the product lifecycle remains unaffected in all territories.  We will be monitoring the various options available and keep you informed every step of the way.

Significantly, however, is the intrinsic link between the UK and Irish medicinal products supply chain.  Many medicinal products in Ireland are registered under the Dual Pack import Registration (DPR) scheme and parallel product authorisation (PPA). Such products are typically imported from cheaper markets such as the UK and bear either a DPR number or PPA number on their packs.   Additionally, some MA’s bear both a Product Authorisation (PA) number and also a Product Licence (PL) number whereby the package leaflet and the labelling has been assessed in parallel by both the MHRA & the HPRA and the use of a common pack for both markets has been agreed.  Once Article 50 (the mechanics for withdrawal from the EU) is triggered, are we likely to see withdrawal of these products from the Irish market?

We will negotiate on your behalf with the Competent Authorities involved and ensure the best possible outcome at all times.

The Implications on the Clinical Trials Sector

Britain’s divorce also raises uncertainties as to how clinical trials will be affected. ‘Brexit’ comes at a time of major upheaval in clinical trial legislation in Europe with the repeal of Clinical Trials Directive 2001/20/EC and its replacement with Regulation (EU) No. 536/2014. Two key factors will determine the shape of all things clinical in Britain – (1) the timing of implementation of regulation 536/2014 and (2) whether Britain decides to join the European Economic Area (EEA) after leaving the EU.

On timing, the European Medicines Agency expects the new regulation to come into effect by end of 2017 at the earliest, and by October 2018 at the latest, when the clinical trial database and portal are fully functional. Were Britain to begin applying the new regulation, as has already happened with Spain, post ‘Brexit’ Britain may stick with the status quo. On EEA membership, a Britain within this framework would see little change in the way clinical trials would operate, as 536/2014 applies to the EEA. They would, however, become a mere observer, and lose their current position of influence and expertise. The new regulation promises to harmonise the regulatory environment in Europe, with a single, centralised portal for application dossiers. From our own experience of clinical trial applications under the outgoing directive, country specific nuances and requirements make the process particularly onerous. A Britain outside of the EEA and this streamlined process will surely be a less attractive place for clinical research.

The future is very unclear, as there is mixed opinion as to whether Britain would even choose to join the EEA. Indeed there is a possibility the referendum decision could be vetoed by Westminster, or even Holyrood. A Britain outside the EEA would then more closely resemble Switzerland, where clinical trials are overseen by their domestic regulator, Swissmedic.

The Implications on the Medical Devices Sector

The future implications of ‘Brexit’ for the UK medical device industry are yet to become clear. There is one certainty: until the UK exits the EU, the IVD and medical device directives apply, and CE marked goods will continue to be certified and traded as they have prior to the referendum. In the future, if the UK opts to become part of the EEA (like Norway), the free movement of medical devices under the CE Mark system will continue. This option would have minimal impact and would be comparable with the current system. Other potential options could be to set up a mutual recognition agreement with the EU for trading of CE marked medical devices; or to trade with the EU under a special agreement or World Trade Organisation agreement. The UK-based Notified Body, BSi, has issued a statement where they have stated that they anticipate that they will remain a long-term major EU Notified Body as there are existing mechanisms in place for non-EU countries to participate as EU Notified Bodies.

The reluctance of both EU and UK officials to trigger Article 50 means that the timescale to prepare for an eventual exit is being elongated on a daily basis.  It must be noted that the referendum was an advisory vote rather than a constitutional amendment.  As such, it may take many months or years for ‘Brexit’ to complete its passage through the Houses of Parliament.

Despite the uncertainty of the situation please be assured that our team is keeping abreast of the situation to ensure that clients in both the pharmaceutical and medical device sectors are protected.  We have a public policy specialist on our staff who will be responsible for tracking the progress towards the EU exit and assessing the implications for our client companies.

If you would like to have a discussion about how we could help your company to navigate the uncertainty posed by Brexit then please get in touch.  Call us today on 00353 52 61 76706 or complete the details below:

We produce quarterly Brexit briefings that are available to download right here.

Moving EU Authorised Representative: Find Out How To Move

EU Based QPPV – Is Your Company Ready for Brexit?

As Brexit negotiations reach their most critical point, it looks today (October 17th, 2019) that a deal is in sight.  The EU and the UK have agreed a deal and the UK Parliament are now set to vote on the deal on October 20th. Therefore, companies that have not yet arranged for an EU based QPPV must do so urgently.

Our team of EU based QPPV’s can help.