We are looking at five of the biggest stories in the pharmaceutical, medical devices and clinical trials sectors in the past month. Each month we will seek to highlight 5  key stories in trade publications and newsletters. This month we are looking at President Obama’s Precision Medicine Initiative (PMI), a welcome reduction in FDA fees for medical device companies and more. 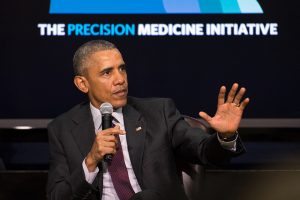 Amidst the wall-to-wall coverage of the upcoming November election in the USA, President Obama continues to march ahead with his much vaunted Precision Medicine Initiative.  The research project, with $215 million in funding, aims to tailor medical care to the individual.  The initiative was announced in the 2015 State of the Union address and has been described as ‘big data meets genetics’.

The FDA has issued two draft guidelines on Next Generation Sequencing which many believe is setting the foundation for the Obama initiative.  Read more about PMI in this RAPS article.

Biogen and AbbVie’s multiple sclerosis drug,  Zibyrata, has been approved for use in the European Union.  EU approval comes after FDA approval in late May. The drug, administered once monthly, is a treatment for relapsing and remitting multiple sclerosis (RR-MS) and gained EU approval following two studies involving approximately 2,400 people. Read more about Zinbyrata in this PharmaFile article.

The Brexit fallout continues apace. There has been speculation about almost every major manufacturer and their intentions to stay or to leave the UK in the wake of the June 23rd decision.  This month two CEO’s, GSK and Astra Zeneca, are expected to announce that their companies will be remaining in the UK. This report from Fierce Pharma, attributing The Times of London as the source, states that neither company will be departing.

The much-publicised IPHA deal with the Government has garnered international headlines.  The four year framework will see the state make savings in the region of €600 million. Internationally, the agreement drew criticism from biosimilar and generics industry group HEA (Healthcare Enterprise Association).  Read more about the agreement here and in The Irish Times.

Note: These articles are intended for information purposes only and the opinions contained therein do not constitute an endorsement by Acorn Regulatory Consultancy Services Limited.

Find Out How Acorn Regulatory Can Help Your Company.  Get In Touch