TOPRA Symposium Blog: What Does The Industry Think of Brexit?

After more than 3 years of formal negotiations, political turmoil and an ‘aerial warfare’ on multiple media platforms, the UK plans to leave the EU at the end of this month.  However, it might not actually be leaving if an agreement is not in place or if they seek another extension.   We spoke to delegates at the recent TOPRA Symposium and got their views on Brexit. 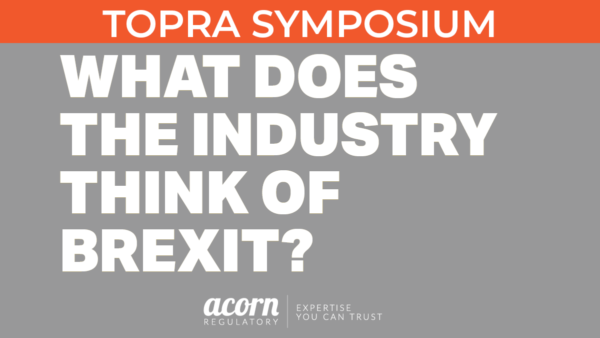 Regular visitors to our website will know that Acorn Regulatory has been at the forefront of assisting life science companies in preparing for this event.  We have assisted companies in setting up new distribution channels outside of the UK, we have helped countless companies to move their EU Authorised Representative from the UK to an EU 27 member state, worked to transfer a considerable number of MAH’s where the UK was the RMS and taken on EU QPPV responsibilities.  Furthermore, we have written extensively on the issue since the referendum in June 2016 and you can read our complete catalogue of Brexit related articles by clicking here.

Recently, we participated in the 2019 TOPRA Symposium which was held in Dublin from September 30th to October 2nd 2019.  During the course of the 3 days our colleagues met with hundreds of attendees and the main topic of conversation was the UK’s impending departure from the EU without a comprehensive trade deal.

In this article we will highlight some of the opinions and reactions of the attendees towards Brexit and look at what steps that can still be taken by companies who might yet have work to do in getting ready for Brexit.

The View of Brexit From UK Companies

The general consensus among the regulatory and PV professionals that we spoke to about Brexit was that the UK’s departure without a deal is “needless” and detrimental to UK manufacturing and the overall reputation of the United Kingdom as a business location.  One attendee who agreed to be quoted, without attribution, said ” The UK’s position as a leader in the sector has been thrown onto a bonfire to fulfil Boris Johnson’s political ambitions”.

Strong sentiments indeed.  However, they were echoed time and again by attendees from the UK that we spoke to at the TOPRA Symposium.

Turning to the anticipated impact of no deal, there were many examples, over the 3 days of people who highlighted the issues that their companies were and are experiencing in identifying and recruiting suitably qualified regulatory staff.  Many of those that we spoke to attributed this to the uncertainty of Brexit and the issues that had arisen regarding residency and the ‘right to settle’ in the UK after the departure from the EU.

It must be noted that much like the results of the referendum, there is a significant group of attendees at the UK who voted to leave the EU and believe that such a move will be positive for the UK.  Many that we spoke to feel that the UK will now be better able to compete against countries like Ireland to win new life science investment.  The possibility that the UK might, in time, lower its corporation tax rate to match that of Ireland, is seen by those in the ‘leave’ camp as something that will ‘turbo charge’ the UK’s life sciences sector and lead to significant investment from multinational corporations.

Unsurprisingly, the views of UK residents and nationals attending the TOPRA Symposium, was mixed on the benefits of Brexit.

How Will Brexit Impact Your Company?
Our Brexit ebook collection has over 30 expert articles looking at how Brexit will impact the life sciences sector.
Get the ebook collection

The View of Brexit from EU (and non UK) Companies

The EU based companies that we spoke to at the Dublin event fit broadly into 3 categories: 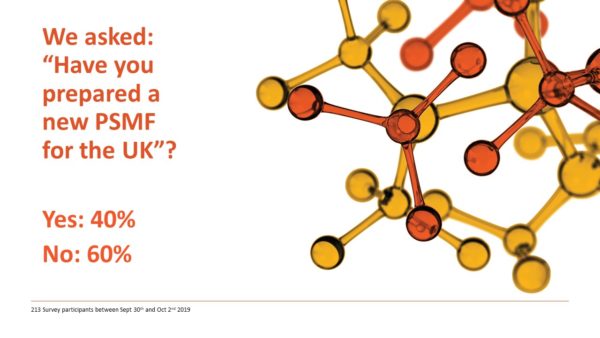 While it could be argued that the 3 points above were, and are, experienced by the UK there was a feeling of frustration that this is a UK issue that is now impacting on the entire European Community (and beyond).

The second issue, that of reduced bandwidth for proactive endeavours, was referenced again and again by both EU and UK company representatives.  Naturally, the biggest geopolitical event to have befallen Europe since the fall of the Berlin wall is going to bring with it difficulties.  However, it was felt by a significant amount of the people that we spoke to (those who supported leaving and remaining in the EU) that the regulatory sector was particularly impacted by the decision. The time that has been set aside to deal with Brexit issues, it was widely felt, would have better used to drive the development of their respective companies.

While at the TOPRA Symposium we asked people visiting our stand to take part in a survey on a wide range of issues.  The larger aspect of the survey, that dealing with pharmaceutical, medical device, pharmacovigilance, eCTD and clinical matters will be published in January.

Several of the questions in the survey focused on Brexit and, in the main, they showed an industry ready to face the challenges that the UK’s departure will bring about.  However, on the issue of the UK PSMF (which we highlighted recently) there was some divergence.  60% of the 213 people who completed the survey stated that they had not yet prepared a new PSMF for the UK..

If you would like to receive a copy of that survey, when it is published, please subscribe to our newsletter below and we will email it to you as soon as it is available.