The UK pharmaceutical sector employs in excess of seventy thousand people. The structure of a Brexit will have significant impact on them and the industry that they work in. For now, there is a firm belief that the UK will make a full exit from the single market and, with that, there will be restrictions on those seeking to move to the UK. How will the UK handle post Brexit skills shortages?

As a sector that is heavily reliant on attracting the right people from all over the world, this is expected to cause major headaches for companies seeking to leverage these talents to grow their businesses.

This is one of the articles featured in our 2nd Brexit whitepaper ‘Heading for the Exit’. Click the cover to download the whitepaper

Even before the development of Brexit, The Association of the British Pharmaceutical Industry had issued a report “Bridging the skills gap in the biopharmaceutical sector” in November 2015 to highlight the paucity of adequately qualified recruits to work with member companies. The report outlined the shortages of qualified staff in areas such as device technology, physical chemistry and pharmacy formulations. The report also noted a shortage of QP’s (Qualified Persons).

The topic of immigration formed the centrepiece to a divisive and often ugly referendum campaign. There is a school of thought that believes that then Prime Minister David Cameron did not do enough to address the issue during the course of the campaign. Many people felt that he did not set forth a positive overview of the benefits of immigration to a country that plays such a part in the global economy.

Now, the UK pharmaceutical industry faces the prospect of a cumbersome immigration process that will deter the most capable candidates. Furthermore, the risk of ‘investment flight’ from the UK as threatened by countries such as Japan, may mean that the most capable candidates will not have the opportunities to work on ambitious R&D projects and they will seek to locate elsewhere in the EU or globally. 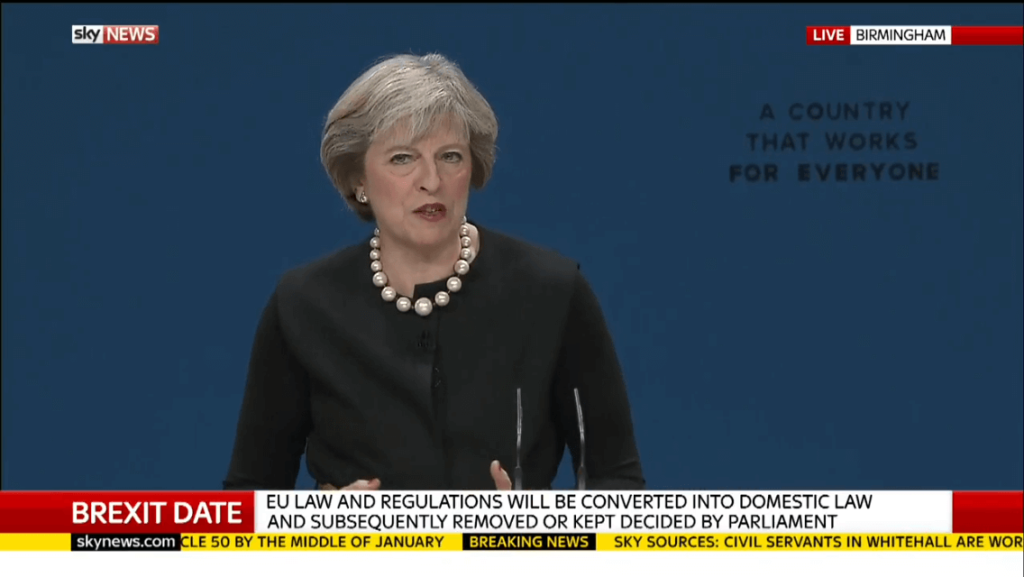 British Prime Minister Theresa May speaking at the Conservative Party conference in October 2016 where she informed delegates that she will be invoking Article 50 of the Lisbon Treaty in the first quarter of 2017. Photo credit: Sky News

‘Brexiteers’ have pointed to the benefits of introducing a points based system to ensure that those with the skills that are needed can get through the immigration process while those that may be a drain on the resources of the state will be prevented from doing so.

So, what will the UK pharmaceutical sector do? It is obvious that they will have to start thinking differently. A recent report about the impacts of Brexit by The Resolution Foundation suggested that lower skilled jobs would need to be automated and that technology may also need to play a part in the high-paid roles that may no longer be filled. While, for some, this may not seem like an option, the fact remains that a country that already struggled to attract the requisite amount of candidates to fill jobs in a £56 billion per annum industry will now face significant roadblocks.

The issue of free movement has been, for some time, a pillar of the pro-Brexit argument. The overriding assumption in all of the highly charged political arguments is that free movement is a flow of lower-paid individuals.

The end to free movement to the UK from within the EU will cause difficulties for the UK and will, without doubt, see it lose its dominance as a location for R&D as it struggles to attract and bring in leaders in drug development. We now know, that ‘grandfathered’ EU laws will remain in place until such time as the UK decides to draft its own version of the law or repeal it. Therefore, it is safe to assume that all current EU generated laws coupled with the period of time that it will take for the UK to successfully exit the EU, means that there will be no adverse changes in the short term. Longer term, the spectre of changes to free movement will mean that the there will be post Brexit skills shortages and the UK’s ability to attract and retain individuals from outside the UK will be significantly diminished.

This is an excerpt from the Acorn Regulatory whitepaper ‘Heading for the Exit’.  You can read the entire whitepaper and download it now by clicking here.