The Explainer: A Second Referendum or a People’s Vote

Since the result of the Brexit referendum was called in the early hours of June 24th 20016 there have been calls for a second chance or a second vote by many in the defeated ‘remain’ side.  Their reasoning for seeking a second vote has been based on many things:  low voter turnout for the referendum, the speedy volte-face from the victorious ‘leave’ side on many of the promises that they made during the campaign (most notably on the money that would be freed up to provide additional funding to the National Health Service and talk of ‘electoral shenanigans’ by individuals and organisations in a manner that might have impacted on the overall result.

The requests to hold a second vote have been consistently batted back by members of the British government and by members of the ‘leave’ campaign.  However now, with a deal in sight, the talk of a second vote has come back into focus with many people seeing such a vote as a means of gaining a decisive decision on the course of action that the United Kingdom should take.

Many European countries host referendum’s on a regular basis to decide or amend legislation (Ireland being a perfect example in this regard).  In some instances countries have re-run or run amended votes on the same topic.  Ireland and Denmark famously did just this in relation to issues related to participation in the European Union.  Ireland initially rejected the Lisbon Treaty in June 2008 only for the country to return to the polls in October of 2009 to vote to accept the Lisbon Treaty.

The clamour for a second vote in the UK has continued since the day after the referendum.  Recent events have brought into view the support that such a vote has.  Almost 700,000 people marched in central London in September of 2018 to express their support for a ‘People’s Vote’.  This was the second largest demonstration in the UK in this century.

Yet, at the time of writing, there will be no second vote or people’s vote.  Why?  Firstly, many feel that doing so would undermine one of the tenets of a functioning democracy.  While Ireland and Denmark revisited the polls on the issue of the Lisbon Treaty and other issues, this is a far more volatile and emotive subject.  Furthermore, the United Kingdom is a referendum averse democracy and when they hold a referendum they respect the decision. 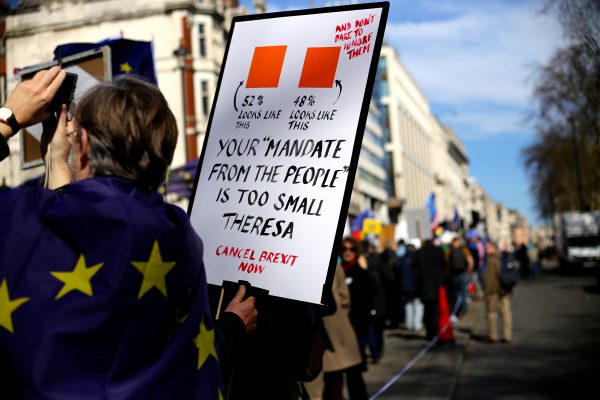 Secondly, amidst warnings of civil unrest, there is a belief that to disregard the 2016 result would legitimise violence as  a means of arriving a decision.  It would send a signal to voters that there is no point in trying to settle things at the ballot box.  And that is a very dangerous position for any democracy to be in.

Finally, the cause of the ‘second voters’ is a broad church.  There is no agreed upon construct for such a vote.  Some people want a straight re-run of the initial referendum.  Others would like to see the terms of the deal voted upon and others would like to see a multiple option vote whereby voters could choose deal/no deal/stay in the EU as an option.  Therefore, if a vote were to go ahead there would be no guarantee that any grouping within the ‘second voters’ would have a majority to win.

Nevertheless, the high and low profile members of this large group keep pushing for a second chance, emboldened by ex Minister Jo Johnson MP coming on board in recent days.

In short, a people’s vote vote is a difficult step to see the UK government taking.  It might just happen if the stasis of Cabinet and Parliament prevents them from moving forward but there is no guarantee that the outcome will be any different second time around.

Note:  The Explainer is a regular feature in our limited series Brexit newsletter.  It looks at political issues and tries (its best) to demystify them and to outline how they are impacting on negotiations.  You can subscribe to the Brexit newsletter by completing your details below.